As we move into 2017, I think the most thoughtful and pithy thing I’ve read about it is this XKCD comic. I hope you had as good a 2016 as possible, and that 2017 brings everything you need and desire in spite of the confusion and challenges that the world is moving into politically and environmentally.

Last year, I got really, really in to this whole New Year thing. I worked through Susannah Conway’s Unravelling the Year Ahead workbook (which I am now doing again for the 3rd year in a row), did a giant 36-card year-ahead reading, and invented a New Year spread. My word for the year was UNKNOWN, and my overall year theme cards were the Emperor and Failure. Yup. All told, the giant year-ahead spread didn’t amount to much, so I skipped this this year. But I did choose a new word for the year, AWAKENING (or rather, the Slow Holler Tarot chose this word for me) and drew the Traveler of Stones (Knight of Pentacles) and Illuminate for my year themes. I want to talk a little bit about how this year theme thing has worked out so far, and then jump into this year’s Gathering In spread. 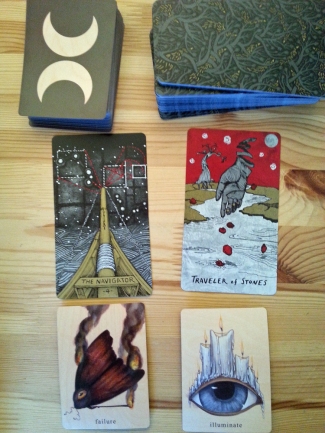 In some ways, I’m glad that I had Failure on the table right from the very beginning, because that’s what this year felt like in a lot of ways. My failure to get a job in particular was something that I really wasn’t prepared for. I apparently wasn’t really prepared to search for a job, either, and I find myself at the end of this year reevaluating my strategies and priorities.

Looking back on my posts about themes for 2016, I’m struck about how I interpreted the Emperor, though. I located the Emperor outside of myself, seeing them as representing institutions and authority figures that I would be up against. Now that I look back on it, it was a strange way to approach the year, to assume that this year would be focused on petitioning large, authoritarian institutions. (Although the Emperor turned out to be a very fitting card for 2016 as an election year.) It wasn’t until a few days before Christmas that I remembered the Emperor card again and wondered–“What if I was supposed to be the Emperor?”

Given the theme of the Traveler of Stones and Illuminate for this year, it seems correct that I missed out on my chance to be the Emperor in 2016 and I’m now being sent back to the drawing board. I look at the equivalent of the Emperor in the Slow Holler Tarot–the Navigator–and wonder if I would have approached the year a bit differently if I had pulled that card instead. (Probably not–I think I needed the experience of this year to learn the lesson.) The Traveler of Stones tells me that I’m going to have to go back to basics, put my nose to the grindstone, and be prepared to sacrifice and let go of some things that I was clinging to in 2016. There are no guarantees of success, but Illuminate echoes the theme of awakening and suggests that this process will awaken me to new possibilities that I hadn’t considered before.

As for the Gathering In spread, last year’s was quite warm and fuzzy, but this year’s is more elusive and abrasive. And I think that’s a good thing.

1 Fire of this year: 2 of Knives. What is it that motivates me? What is it that I actually want to do with my life? The answer isn’t so clear. I want to work on tenderly exploring this impasse, rather than remaining defensive and stagnant. I have a lot of very specific ideas about what I want to do and the context in which I want to do it. I’ve got a long list of stuff that I don’t want to compromise, and I may just have to make some compromises.

2 Air of this year: Traveler of Vessels. Let’s let the intellect roam–a year of being a dilettante, not an expert. The question is: how do I bring this out as a strength? Because my lack of discipline means that I got almost nothing written in 2016, and therefore not even close to getting something published. I have so many ideas, but shoot them down before I get too far. The phrase in my head popped up this morning: “Write first, ask questions later.” Did I make that up?

3 Earth of this Year: Ace of Branches. HERE is my fire and inspiration! I may be more motivated this year by finances and the prospect of stability, rather than my ideals. This has been a source of tension for me lately–I could get a job doing something that I don’t want to do, but I’m having a hard time finding jobs for what I actually want to do. Do I change my ideals? Do I just take a “job job” and try to squeeze in other stuff around the edges?

4 Water of this Year: Four of Stones. Notice any tendencies to close off or isolate myself from others, or, conversely, to rely too much on others. How do I preserve emotional boundaries without making them into a prison?

5 Spirit of this Year: Six of Stones. Operating from a place of scarcity isn’t going to cut it. I really need to open my spiritual practice up. This year began to shift my understanding that my spiritual practice isn’t about me, but it’s about all beings, myself included. My head is beginning to make that shift, but my practice is not there yet. I need to come out of that defended, self-centered place and be more generous and giving (which translates to: practice more and take it more seriously.)

6 My Guiding Light: The Devil. Well, this is one to think about! It’s probably prodding me toward a more, well, devil-may-care attitude toward things, being less cautious and less picky. This Devil card is so abrasive and unsettling, but for that reason I kind of love it. (Also: body hair and uneven boobs: yes!)

7 My Personal Power: Student of Branches. Remembering that I’ve got a lot to learn and a lot to build. I’ve been getting a lot of the Student and Traveler cards lately, a reminder that I’m not in a place of mastery. I’m entering a new discipline via work and I am also entering a new world with a radically altered political landscape. Learning and hard work are the main modes that I need to move into. I’m not going to beat myself up about slacking this year, since I did just finish a DOCTORATE, you know. But time to get back to work.

9 How to take care of myself: 10 of Vessels. I got the 3 of Cups (Vessels) last year, so this is a progression in a theme. Do not isolate! Seek friends and lovers for comfort. Cultivate gratitude and awareness of others’ gifts.

10 What is AWAKENING? 5 of Knives. I really love this card–which is strange, since 5 of Swords isn’t a card that has ever really attracted me. When I saw 5 of Knives come up here, I went “ouch,” but in a good way. Awakening is about understanding hurt: the ways I hurt myself and others, and the ways that I am hurt by things outside my control. It’s time to take a good, long look at this stuff, whether it be understanding my privilege or exploring how I’m carrying old wounds into the present and doing little things that hurt others. I love this interpretation of the card because it’s about the skeletons in the closet–time to get them out, to take out those old knives and put them to work in the kitchen.

Rather than looking at this spread as being predictive, I’m looking at where I am now and what it illuminates as I move forward. This spread isn’t what the year will be, it’s what I need to do.

I hope you move into the New Year with grace and power. Please let me know if you use the Gathering In spread, if you’ve got a word for this year, or if the cards have given you some good insights about the year ahead!