This is part of an ongoing series in which I write about my interpretations of the cards in A.L. Swartz’s Wooden Tarot. You can find the other posts here. 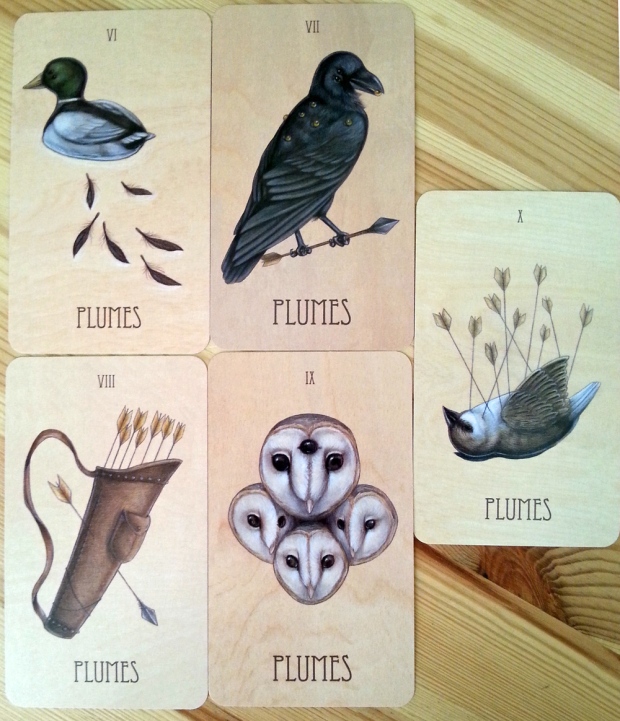 A Common Mallard swims away, looking over his shoulder with two eyes on the same side of his head. Six dark-brown feathers trail behind him.

This is another card that conjures up the image of its corresponding card in the Waite-Smith deck fairly well. This somber-looking Mallard decisively sims away, although his backward look suggests that he is not moving on without leaving something worthwhile–or painful–behind. This card echoes the Four of Plumes as well: the bird’s plucked feathers suggest a respite after pain or trauma.

Keys: leaving a painful situation behind; learning from past mistakes; sacrificing comfort or certainty for the great good; abandoning an idea, belief, or ideology that no longer serves you

Reversed: being unable to move on; operating from beliefs that are not helpful; stuck in outdated assumptions about yourself or others; making excuses for staying in an unhealthy or painful situation

A Common Raven with an extra eye perches on an arrow, holding a small yellow transparent orb in its beak. Six other orbs stick to its feathers.

I think this is a raven, rather than a crow, for a couple of reasons: the more pronounced curve of its bill and the face that it dwarfs the arrow on which it perches. (Ravens are huge.) I am not the best person to discuss raven folklore, but suffice it to say that the raven is association with a lot of it all over the word. It seems that the raven most often appears as a bird of ill-omen or a trickster.

This raven seems to think it’s pretty clever, adorning itself with (perhaps stolen) baubles. I think there are several ways that this image can be interpreted, but the strong sense that I get is that the raven has stolen its little ball, not realizing that it wears the evidence of its theft. This reminds me of our inability to see our own faults even though they are clearly visible to others. How oven have we seen an aggressive person come to the conclusion that someone is an asshole, or a controlling person criticize someone for being a control freak? To me, this card is about trying to get away with something but forgetting that what we try to hide will be visible in some other way, and the things about ourselves we try to repress will always be projected onto others.

Keys: self-deception; trying to hide things from others; hypocrisy; leading a double-life; dishonesty–whether from malice or vulnerability–is somewhere in the situation.

Reversed: being (painfully) honest with yourself; coming clean about a situation; getting caught; seeing through someone’s ruse, or being seen by others

A quiver with seven arrows in it. An eighth arrow pierces the quiver.

When I first saw this card, I thought it corresponded to the Eight of Wands. Then I thought, “No, that’s not right,” and tried to square it in my head with the Waite-Smith image of a blindfolded woman tied up among eight swords. It was only after I realized that one of the arrows is actually piercing the quiver (not easy to see at first glance) that the meaning of this card made sense to me.

I think the meaning of this card is closer to the Thoth meaning for the Eight of Swords–Interference. The arrow, which should be aimed outward to accomplish its objective, is instead turned back on the place that it came from. It may or may not be preventing the other arrows from being shot, but in any case no bow is in sight. Unlike The Hermit or the Four of Plumes, turning inward is not helpful here. This card states that getting out of your head is the best way to move on.

Keys: being hamstrung, especially by self-hating or self-limiting thoughts and beliefs; self-sabotage; focusing on limitations rather than possibilities; turning against oneself

Reversed: clearly seeing through conceptual limitations; taking responsibility for your future; letting go of ideas that limit you

A cluster of four Barn Owl faces. The largest in the center has a third eye.

If the Seven of Blooms leaves me feeling icky, this is the card in the Wooden Tarot that sends chills down my spine. In the Waite-Smith deck, this card of insomnia and mental torment is portrayed by showing a woman sitting up in bed with her face in her hands. Here, instead of portraying that experience, the card invokes it. Barn Owls are the ghost-like faces of the night, completely silent until they send up an unsettling cry. These deep black eyes reflect our disquietude back to us–perhaps in them we see the demons of our past or our fears for the future. In any case, they do not look away. It may be that the only way to deal with these thoughts is to steadily meet their gaze.

Reversed: seeing things in broad daylight; getting a new perspective on a formerly troubling issue; facing fears instead of running away;

A small bird lies on its back, pierced by ten arrows.

Like the Three of Plumes, this card closely resembles its corresponding card in the Waite-Smith deck. Unlike the man pierced with ten swords in the latter, however, there is no blood here–not even any dislocated feathers. It is simple, matter of fact, and the lack of gore tells me that this is a death that is happening, not in the realm of the physical, but in the realm of the mind. We’ve arrived at the end of a cycle with this card–in fact, we’ve gone past the end into the place where regeneration is possible.

Since I’ve started reading tarot, my interpretation of the 10 of Swords/Air has basically become: STOP THINKING. THINKING ABOUT THIS ANY LONGER WILL NOT SOLVE ANYTHING AND CONTINUE TO CAUSE HARM. YOU ARE BEATING A DEAD HORSE. YOU ARE FOLLOWING A BELIEF OR IDEOLOGY THAT IS SIMPLY UNTRUE. STOP THINKING! That’s how I see the card, caps lock and all. We have bottomed out in our thoughts and beliefs; this is a kind of death because moving forward will never be possible. It is painful because being in this position requires losing faith in someone or something, or having to give up an identity category, or realizing that something you took for granted as being true isn’t, which throws everything into doubt as well. But it’s only from this place of pain that new wisdom can be sought.

Keys: dead end; crisis of faith in a person or belief system; feeling distressed or overwhelmed by knowledge or lack of it;

Reversed: moving on from loss; being able to enter greater truths by leaving old ones behind; realizing that a thought pattern or belief doesn’t serve you anymore