Year Ahead Spreads are quite common in the tarot world–the idea is that you draw one card for each month, or some variation thereof, and perhaps also a card signifying the overall theme of the year. From this reading, you will be able to predict or plan for the coming year.

Now, I am not a predictive tarot reader, meaning that I don’t use tarot to predict the future or think that it can do a particularly good job of doing so in many cases. (That is, it can’t “predict” things that the querent doesn’t already intuitively know.) While tarot can predict the outcomes of certain events based on our habitual patterns and known factors of a situation, this is more like a meteorologist predicting the weather than anything else. And when I said “tarot can predict” in that last sentence, I meant, “tarot can open up a space for understanding.”

And yet, last week I decided that I wanted to do a year ahead spread. And I’d out do myself (and everyone else) by drawing THREE cards for each month plus an oracle card! That’s right–we’re talking a 50 card spread here; definitely the largest I’ve ever done. I chose the Wild Unknown Tarot and the Earthbound Oracle because they are both rich in meaning but simple in imagery.  I imagine that doing a spread this large with very visually complex decks could get pretty overwhelming. I also went through both of those decks and turned all the cards upright. (With a 50 card spread, there’s enough going on without the added complications of reversed cards.)

So here’s what I got: 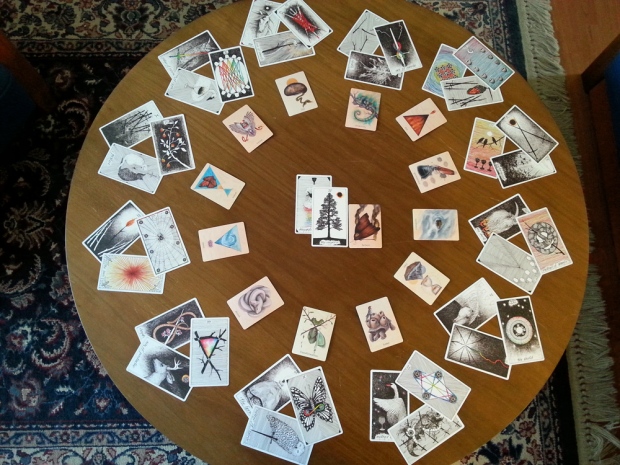 Now, if you look closely in the center, you can see my two yearly theme cards: The Emperor and Failure. AAAAAHHHHHHHH!!!!! Yes. The Emperor and FAILURE. With, like, a flaming moth and everything. Who would be happy turning these cards over? I mean, it could be worse–I could have gotten the Tower or the 10 of Swords or something, but these are pretty two intense cards.

I am not going to go into all the details of this spread because it would take forever and you don’t want to read them. (I am thinking about doing a monthly post using these draws, though. We’ll see.) But I had a ton of fun with this reading: counting courts vs pips vs majors, seeing how the elements break down, following the thread of each suit through the months and seeing what stories it creates, and figuring out a narrative for the oracle cards.

Following the suits through the months was the best way to make sense of all this information. For instance, from March to July, there is a Pentacles card for each month: Six, Eight, Son, Two, and Four. This narrative would suggest that in these months I will not lose financial stability, but I will need to work to maintain it (Eight and Son), that I will be faced with some choices surrounding money, like perhaps a new job and new benefits package (Two), and I will reach financial stability (Four) by July. After that, Pentacles basically peace out for the rest of the year, with the exception of the Ten in November, suggesting that I will be in a place of abundance by the end of 2016.

A long Cups narrative picks up just when the Pentacles are leaving off, with a Cups card in each month from June to November: Mother, Five, Seven, Three, and Nine. The Five and the Seven suggest that around the time I’m gaining financial stability, there’s some emotional upheaval going on–perhaps because I’ve had to move for my new job and I’m sad at leaving my old home behind (Five.) Perhaps I will encounter a new group of people and won’t know quite who to trust at first (Seven.) The month that the Seven is in, September, also contains The Devil and the Mother of Wands, as well as the oracle card Resistance. This suggests to me that I may actually fall prey to some sort of emotional temptation and will have to stay on my toes if I want to keep on course. Overall, however, the narrative ends happily with the Three in October and the Nine in November–that I will be able to find a new group of friends and figure out how to keep in touch with the old ones.

OK, I’ve bored you with this stuff long enough. Yes, it’s fun! I had so much fun doing it, but the question is: do I believe this is what the future holds? I’d love it if this were so, but I’m pretty skeptical of the idea that some cards I drew on an evening in December 2015 can predict every twist and turn of my life for the next year. Nonetheless, putting this narrative together was useful because it reminded me of a lot of basic things it’s easy to forget: yes, finding a new job is probably going to take a lot of work and involve some uncertainty. Yes, moving away is a big possibility and that entails grief as well as new beginnings. Yes, entering a new social circle is going to involve uncertainty and a lot of ego, as well as a lot of joy.

But honestly, it’s the Emperor + Failure that makes it. If as my yearly theme I’d gotten Fluffy Bunnies + Sugardoodlins, this spread wouldn’t have been very useful. The Emperor reminds me of what I’m up against: applying for jobs, dealing with health insurance, moving all our stuff from one place to another, renting or buying a home. Almost nothing is certain for the coming year, except one thing: I am going to be dealing with institutional structures and people in positions of power A LOT. And not only that, but I am bound to screw up a lot of stuff along the way because I’ve never done most of these things before. In the midst of the diversity of things happening in the monthly card draws, Failure reminds me that failing is a necessary part of the process. That I don’t deal with the Emperor by never failing, but by learning from my mistakes. What a beautiful and necessary message for the year to come.

Since I’m not a predictive tarot reader, I don’t think of the Year Ahead Spread as actually predicting what will come in the following year. I do think, however, that it’s a great way of entertaining and preparing for the range of possible things that could happen. I want to check in with this spread periodically to see if it was “right” about anything, but that’s for fun more than anything. Whether it comes true or not, the purpose of doing this spread was not to predict my future, but to leave me feeling empowered. I believe that’s the purpose of tarot, anyway, and it did indeed succeed.

Stay tuned for a significant (and frankly, sort of creepy) reappearance of the Emperor in my actual, non-predictive Gathering spread for 2016.