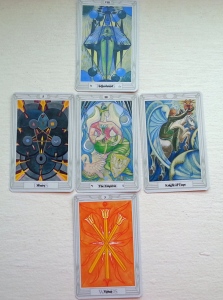 I tend not to watch or read the news on a regular basis, preferring not to learn about the sufferings of the world through the heavy filters of  daily mainstream media. But I do think that it is important to know about suffering, even if everything in our own existence is comfortable for the moment.

Yesterday I found Sympathy at Slaughter, a Toronto-based project focused on bearing witness to the suffering of animals as they are about to be trucked into the slaughterhouse. I am vegan–but my cats are not. I also ate meat–and lots of it–for the first 20 years of my life. I am just as complicit in this suffering as anyone else; I am not trying to put myself on a pedestal or bathe in self-righteousness because the truth is that ALL food–even vegan food–involves suffering, violence, and exploitation. I have complex views about killing animals for food and am not a knee-jerk member of the Vegan Police or a supporter of PETA.  I realize that not everyone is in a position to go vegan–people live in food deserts, or they can only afford the cheapest of cheap food, like ramen, and yes, some people need meat in their diets in order to live.

That being said, I feel it’s important that those who buy meat from a grocery store or eat it in restaurants bear witness to the suffering that they are eating. Not only is factory farming one of the most environmentally destructive factors in the world right now, but the suffering of the highly intelligent animals featured in Sympathy at Slaughter is palpable: animals piled on top of one another, driven to the slaughterhouse in freezing temperatures or in temperatures so hot that they smother; animals standing in their own feces and that of others; animals covered in cuts and scratches; animals who, if they cannot get off of the truck quickly enough, are struck and poked with cattle prods over and over. This is the reality of the cheap meat that North Americans eat for two or three meals a day, every day of the week.

I then read the story of another kind of suffering: 6-year-old Strider Wolf, who at the age of 2 was beaten so severely by his mother’s boyfriend that a hole was punched in his stomach and his intestines were broken open. Strider and his younger brother now live (in poverty) with their grandparents, the only adults stable enough to take care of them. Living in rural Maine, they spent a spring and summer in an RV, moving from place to place after getting kicked out of their mobile home for failure to make rental payments on their lot. Strider’s grandparents’ health problems keep them from getting regular work and they struggle with not only financial stability, but creating an emotionally stable environment for the boys.

Bearing witness to suffering like this is difficult, but necessary. How could I begrudge some cheap meat to Strider and his brother? And yet, I know where it comes from. Reading these pieces, however, will lead to despair if it’s not done within the context of cultivating compassion and not followed up with self-care. Last night, feeling heavy with what I’d seen and read, I decided to turn to tarot, not to make the suffering go away, but to affirm what I was feeling.

When I am in pain, the most helpful thing to do with tarot cards is to not ask them a question. When we ask questions,  we want answers–we want certainty. But I didn’t need any answers, I just wanted confirmation of what I was feeling. So I pulled out my small Thoth deck and asked, “Can you please just mirror what I’m feeling back to me?” I then laid the cards out in a cross formation (I did a Celtic cross, but I have also done a full-on Latin cross for this exercise.) 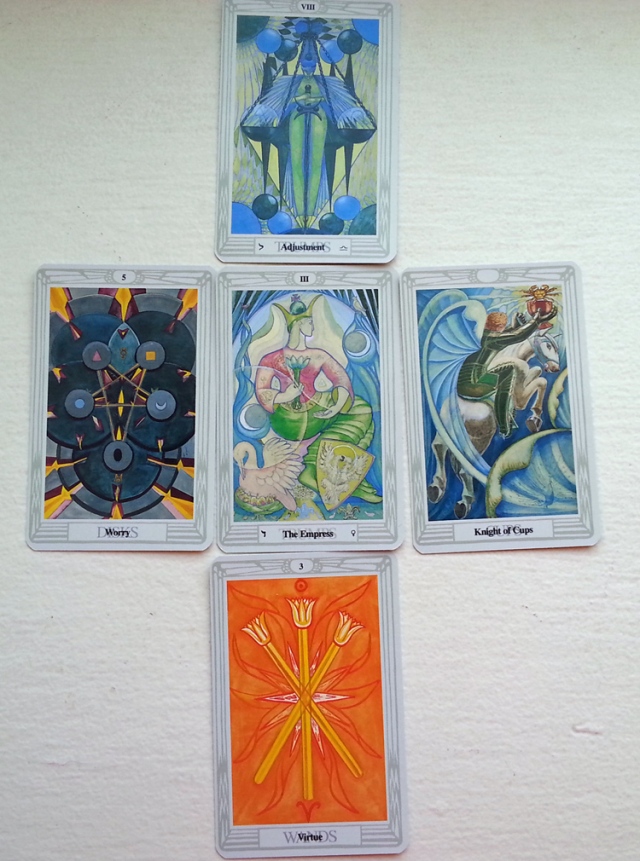 This is what I got: the Empress, surrounded by Justice/Adjustment, The Knight of Cups, the 3 of Wands (“Virtue”) and the 5 of Disks (“Worry.”) I wrote in my journal:

An earthy center surrounded by the four elements on all sides. The Empress is an expression of my desire to heal and my capacity to feel compassion. She looks forward to the Knight of Cups, whose heart seeks after ideals based in love. She is supported in all that she does by a strong sense of goodness and virtue–not ethical perfection, but the desire of trying to figure out what is right in every moment. Above her is the ideal she seeks for: justice, the righting of wrongs. Behind her, compelling her actions, are the worries and sorrows of the world.

I have not done this mirroring exercise many times, but when I do, it always turns out to be a potent method of self-love and self-care. It’s not that the cards are somehow sentient and tell me things about myself that I don’t know. Rather, the images and words on the cards give me a space to remind myself of my own good qualities, the validity of my struggles, and the fact that I feel pain when seeing the suffering of others is a positive quality. That being said, it seems like the art of the Thoth deck is most conducive of this result for me and I’ve never entrusted this exercise to any other deck.

Tarot always functions as a mirror, but I think sometimes we can see more clearly when we do not expect anything of the deck apart from simple recognition. No answers, no certainty, no advice; just confirmation and a sense that your feelings are valid. I’ve never seen this method written about anywhere else, but I doubt I’m alone in practicing it. Has anyone else tried?

I'm an environmentalist looking to make it my full time job. And I've got a Ph.D. in British literature from the University of Michigan. I'm also a birdwatcher, book lover, cat lover, David Bowie lover, poetry lover, vegan food lover...OK. I love a lot of things. View more posts