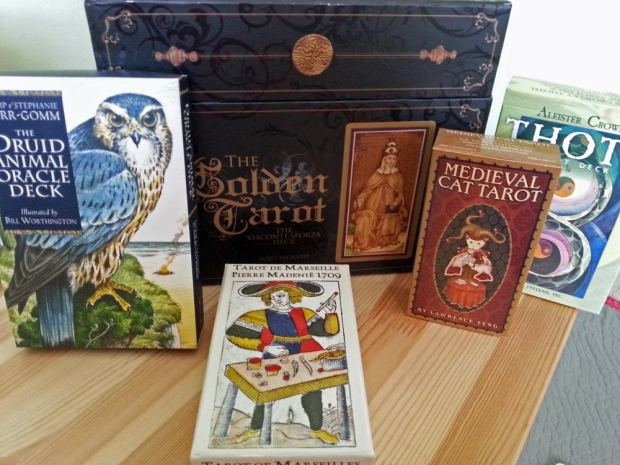 I’m back after over a month on hiatus. I returned from my wonderful trip to Vermont on August 8th and spent the next three weeks finishing my dissertation. Tarot was indeed a powerful part of my experience in Vermont and I’m drafting a post about it, but right now I thought I would do the easy thing: a big fat update on all the stuff I’ve bought.

Before all that, though: you’ll notice that I’ve tinkered with the design of this blog a little. It took a long time for me to find a theme I was happy with. I also updated the about page and decided to unashamedly write this blog under a pseudonym: Emily Francis Clare–Emily to you, bub! The reason behind the pseudonym is that down the line I may want to start a tarot business and I have ideas for an oracle deck and a book on tarot that I’d like to publish. I’d like to keep these separate from my day job and academic publications, at least for the foreseeable future. Those are huge plans, though–many years in the works. In the meantime, it’s fun to take a new name, so why not?

Despite the ending of my last post, in which I predicted that I would not be buying any more decks for a while, I have actually purchased four. Ugh!

Recently, I did a tarot reading to see why I wanted to buy so many tarot decks. That’s a little like putting the fox in charge of the hen house, isn’t it? It would be, except that I got a really good answer which was basically: writing a dissertation all day means spending all day sitting in front of a computer which means that I’m much more likely to look at decks online and develop lust for them, etc., etc. Spending too much time in isolation with all the buyable things in the world at my fingertips via the internet is a dangerous combination. Thankfully, the tarot reading did not suggest that I should be buying more decks!

Anyway–buyer’s remorse and the gnashing of teeth aside, the decks are in my life to stay so I’d better learn how to use them for good. The other night, I rounded up all the decks I hadn’t consecrated and did so. There are many ways that people consecrate decks, some of which involve smudging, crystals, salt, etc. For me, consecrating a deck has less to do with the deck itself than it does with forming my personal intention in using it.

I put the decks in front of my altar and set it up as I normally would for practice by offering water, incense, and a candle. I then improvise something to say over the decks, the jist of which I’ve transcribed below.

Then I begin kido chanting Kwanseum Posal. Kido chanting is, in my tradition, the practice of chanting a short phrase, usually a name. I use kido chanting for repentance, grief, and focus and find that it has a kind of calming and purifying feel. At my temple, we usually chant Kwanseum Posal (Avalokiteshvara/Guan Yin), Ji-jang Posal (Jizo), or Sogamuni Bul (Shakyamuni Buddha.) A beautiful video of the chant can be found here, and the part that I do starts at about 2:30.

As I chant, I take each deck, one at a time, and hold it to my heart. The effect is that the vibrations of my chanting permeate the deck. I’m not actually that much of a believer in vibrational energies in a literal way, but I do think that it’s nice for me to feel the sound of Kwanseum, the bodhisattva of compassion, in the deck itself. After I’ve chanted with each deck for a little bit, I end with a bow.

So what were these decks that I got? Lately, I have been interested in branching out into the two other main tarot traditions: the historical/Marseille system and the Aleister Crowley’s Thoth tarot. First, I got the Medieval Cat Tarot, which is a hybrid between a Marseille-type deck and the Rider-Waite-Smith deck. It was a complete impulse purchase, but it’s a cute deck–and a useful one, too. I can definitely see doing readings for other people with it and I’ve done many good readings with it so far.

And Thoth also started calling to me bigtime. I am not interested in the occult at all, nor do I really care all that much for Aleister Crowley, but this deck is so so so beautiful. I decided to get two historical reproduction decks as well–the Visconti-Sforza, which is one of the oldest tarot decks known, and a 1709 tarot de Marseille. Of course, I’ve bitten off more than I can chew in trying to work with two new systems at once, but that’s OK! I’m having fun. I don’t know if I will ever prefer the Thoth or historical systems over the Rider-Waite-Smith system–only time will tell. The biggest problem now, of course, is that since neither of my tarot books (Benebell Wen’s Holistic Tarot and Paul Quinn’s Tarot for Life) cover the Thoth or historical decks, I will need to buy more books eventually if I want to be a good reader of these decks. In the meantime, I’m OK with winging it.

The other deck you see in the picture is my only oracle deck–The Druid Animal Oracle. A friend purchased this for me a few months ago, but I only just got around to consecrating it now. I’ve only started to warm up to it recently, but I think it will be a great deck. As you can see just by the cover, the art is amazing.

Alright–enough of that. So I’ve bought stuff, yes, yes. I now have a stack of 12 tarot and oracle decks on my desk, with a 13th on the way in the form of the Slow Holler deck. 13 is a good transitional number, don’t you think? So let me see if I can work skillfully with this deck lust and buyer’s mania and transform it into something new.