The Dreaming Way Tarot, written by Rome Choi and illustrated by Kwon Shina was published in 2012. I’d seen many photos and reviews of this deck online and was attracted to it, but had no plans on buying it any time soon. But a few weeks ago something happened that shook me up a little and the next day I had to be out and about for an appointment, so I decided to go down to my local woo-woo store and have a luxuriant browse through their extensive set of demo decks.

I was looking through the decks and thinking about buying the Mystical Cats Tarot (I know, I know. But I live with two cats every day and I’m pretty good at reading cat behavior, so why not read it on a card?) They had some ancient decks on demo that I’m sure were long out of stock, like the Tarot of a Moon Garden (this deck apparently sells in the 3 figures nowadays, so they had punched a hole in each card to deter theft.) My heart jumped a little, though, when I saw the Dreaming Way Tarot. So I plunked down my $20 and went home with this deck.

And to be honest, as I looked through the deck, I had a bit of buyer’s remorse–but not because of the deck itself. I don’t often indulge in “retail therapy” nowadays–it’s not particularly Buddhist, is it? I felt a little regretful about buying this deck on a whim, but as it usually turns out, most of the stuff I buy on a whim ends up being something that I use and enjoy a lot. I don’t need it and the money would have been better unspent, but it’s not exactly a bad purchase either. This deck was going to prove that to me from the very beginning. Once I had looked through all the cards in order, I did what I usually do: shuffled it hand over hand a few times, fanned the cards in my hand, and drew one at random. And what did I get? The Seven of Pentacles. 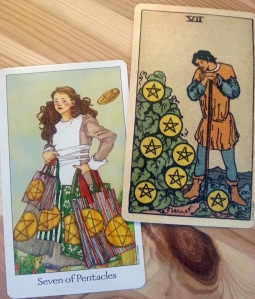 I almost laughed out loud. In the Waite-Smith deck, this card features a guy eyeing his bountiful harvest of pentacle-melons. The meaning of the card is pretty clear–a pause and reappraisal of what’s going on with finances, material things, etc. But the Dreaming Way updates it wonderfully. A woman has many shopping bags in her hands, with six pentacles on the sides. A seventh pentacle floats in the air near her head and she contemplates it. “Should I get this or not? Do I need this one more pentacle when I’ve got all of these shopping bags?” Clearly the card of buyer’s remorse if there ever was one!

Remarkable. The deck itself was chiding me for buying it. In that moment I knew this would be a good deck for me to have. Even if I bought it under less than ideal conditions, I can read it easily.

I was then surprised–and not so surprised–to find that the creator of this deck comes from a Korean Buddhist tradition. In his introduction to the deck, Choi says

One day, I heard a moving lecture by a famous monk while I was watching TV. I suddenly realized that I already had everything I wanted, and there was nothing more I should pursue. That realization changed my life completely. I found the meaning of happiness and could understand the clients’ matters more deeply. As my understanding of people grew deeper, the more I could understand tarot and use it to help people. I also realized that there was no evil in the world in the first place, and I should just accept people as they are. I started incorporating these insights into my tarot lectures.

I think Choi’s statement comes through more clearly in his final sentence, where he says “Rather than searching for happiness, just try to embrace the moments of happiness of your life.”

I might perhaps get into an interpretation of this later, but for now I want to say that it made me start thinking about this deck as one that might be particularly Buddhist in some way. Short answer: there’s pretty much nothing on the surface of this deck that would suggest it’s a “Buddhist” deck. However, if you look at the cards and their descriptions, some seem to have a particularly Buddhist flavor. 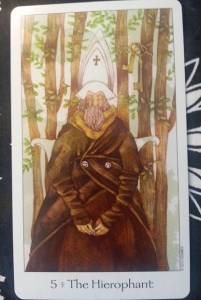 The Heirophant. I have to say: I love this Heirophant more than any I have ever seen. When I looked at this card for the first time, I felt really peaceful and the words popped into my head, “He’s meditating.” One of Choi’s meanings for this card is, “Having wisdom but no power,” which is perhaps why this card seems less about dogma and more about passing down wisdom.

The Chariot. While this Chariot has black and white horses, just like the Waite-Smith deck has black and white sphinxes, the main color theme here is red and blue. These colors represent the Taeguk, or the Korean equivalent of the yin-yang symbol. Choi does not point this out directly, but notes that the Charioteer must achieve a perfect balance between the horses in order for the chariot to go forward. “The driver of the chariot needs to check the direction and make constant corrections. In the same way, we should constantly check our goals in life, and adjust our actions accordingly.” To me, this has a strong flavor not only of good life planning, but of following the precepts, or Buddhist moral guidelines.

Strength. Traditional interpretations of this card usually have to do with gentle power and self-discipline, but Choi takes it one step further. “This form of love [demonstrated by the woman toward the lion in the card] is not the romantic kind. It is the unconditional love that comes from compassion and complete acceptance. There is a great power in acknowledging things just as they are.” Compassion and complete acceptance remind me of the bodhisattva ideal. Furthermore, accepting things as they are does not mean giving away your power; it means being present with life and being able to respond appropriately in the moment. If we are caught up in denial or opinions, we give so much of our power to illusion and make it difficult to take right action. 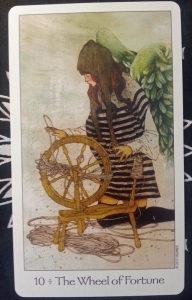 The Wheel of Fortune. Both the card image and the description strongly savor of the concept of karma to me. “If you are unsatisfied with your situation now,” Choi says, “you need to make changes in your life. Expand your outlook by stepping back to see the larger cycles of events. Increased awareness can alter attitudes and outcomes.” The card shows an angel untangling thread from a spinning wheel–getting out the karmic knots. Better “fortune” here has nothing to do with chance–it has to do with whether our actions are based on ignorance or insight.

But mostly, the Dreaming Way tarot has shown me that there’s no need for a “Buddhist” tarot deck, that the lessons of the cards can be used to discover the wisdom of the Dharma, even if it’s by another name.

I'm an environmentalist looking to make it my full time job. And I've got a Ph.D. in British literature from the University of Michigan. I'm also a birdwatcher, book lover, cat lover, David Bowie lover, poetry lover, vegan food lover...OK. I love a lot of things. View more posts